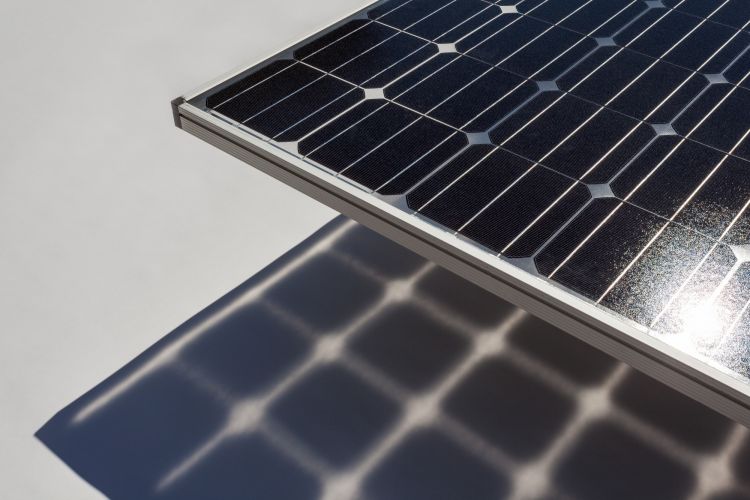 HJT (heterojunction) is an acronym that stands for heterojunction photovoltaic cells. Introduced by the Japanese company Sanyo in the 1980s. Then acquired by Panasonic in 2010, HJT is considered a potential successor to the popular PERC solar cell. HJT silicon cells, and other technologies such as PERT and TOPCON, are selected for the next generation in the global photovoltaic technology deal.
Due to the fewer cell processing steps in HJT and much lower silicon wafer processing temperatures, this technology could simplify current solar cell production lines, heavily based on PERC technology.

The most important feature of HJT is that it is a combination of wafer-based solar cell technology and thin-film photovoltaic cells, using the best features of each. It has the excellent absorption properties of standard silicon wafer cells and the excellent passivation properties of thin-film amorphous silicon. While not essentially limited, it is general practice to only implement HJT on n-type silicon wafers. 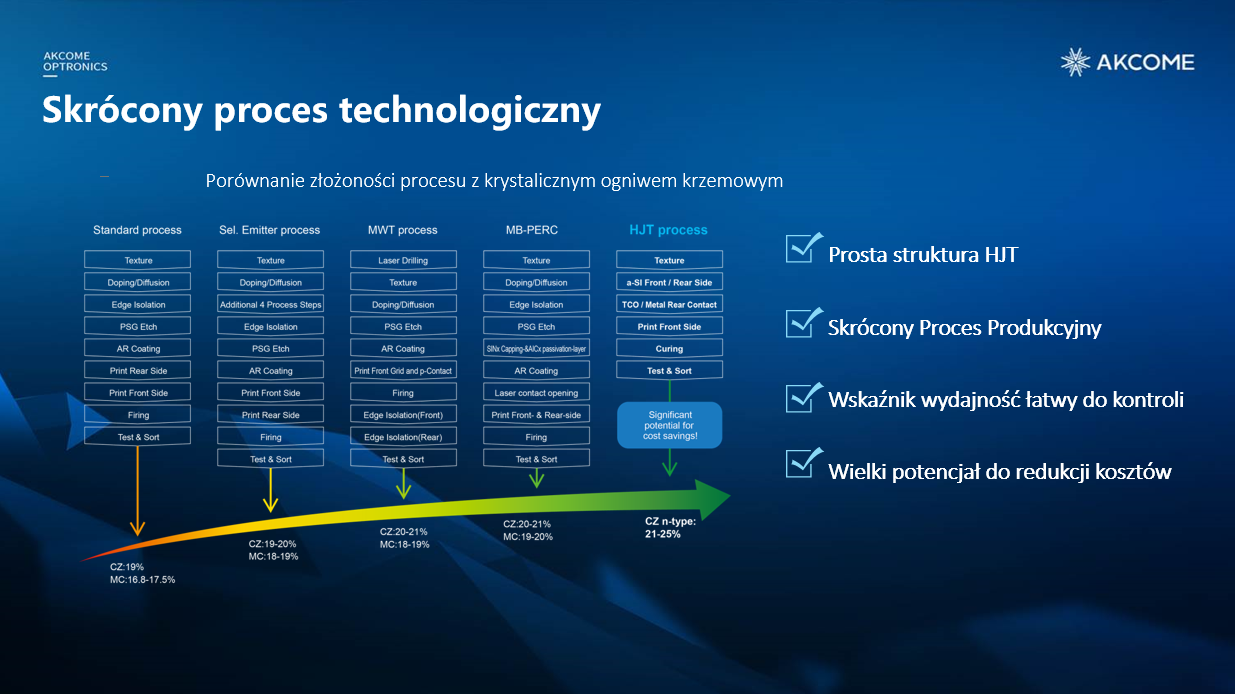 Differences between HJT and N-Type / PERC

Unlike standard (PERC and N-Type) crystalline solar cells, which are homogeneous devices. This means that the p-type and n-type semiconductor layers are formed on the same base material. Heterojoint cells, on the other hand, are made by combining two different types of materials. In the case of HJT silicon, the bond is made between the crystalline and amorphous silicon materials.

The heterojunction is formed between an enriched crystalline silicon substrate and an amorphous silicon layer of opposite conductivity (p-type or n-type, respectively).

Sanyo, which is a pioneer of HJT technology. Proposed placing an internal amorphous layer, between the enriched surfaces of amorphous and crystalline silicon. This gave rise to the famous and patented „Heterojunction Sanyo” with an „Intrinsic Thin” layer, commonly known as HIT.

For practical reasons, the HIT structure consists of a crystalline silicon wafer, typically n-type, sandwiched between inner and oppositely enriched layers of amorphous silicon, deposited on both sides, and a transparent conductive oxide (TCO) on top. Almost all existing HJT concepts are based on this template.

AKCOME declares for its latest Platinum and Black Hurricane (Shingled) series from 24.5% to 24.7% of the efficiency of the HJT silicon used.

Jinergy, on the other hand, in the case of its photovoltaic cells, HJT declares at the level of 24.73% with an average of around 24.5%.

Jinergy in the HJT solar panel achieves an efficiency of 21.4%, which is also a very high result.

AKCOME plans to achieve nominal values depending on the size of silicon cells:

Jinergy offers the following in the Half-Cut glass-glass series:

According to the calculations of the manufacturer of solar panels HJT AKCOME, savings in the case of large solar projects range from a few to several percent. Higher power, bifaciality and production under extreme conditions, combined with the world’s lowest degradation, no LID or PID effects, and a double glass structure (GLASS-GLASS), allows generating significant savings over 30 years of use compared to PERC panels.

Like any technology, Heterojunction has its own set of advantages and challenges. In terms of the technology that HJT rivals, the main challenge is PERC, which is the most known and applied technology for the production of solar panels. Producers of PERC Solar Panels use the know-how developed on the basis of a huge database collected in terms of technology and production. Nevertheless, HJT panels, thanks to their properties, resistance to degradation and the highest efficiency, have a chance to become a leading technology in the production of photovoltaic cells and modules.

With the best large PERC modules, reaching over 21% efficiency, they are not far behind HJT, for which the best modules achieve above 22% Jinergy and AKCOME. Therefore, implementing HJT on larger wafer formats is actually a very hot topic among PV manufacturers and equipment suppliers. HJT solar cells are even more efficient and in serial production, they exceed 24.5% efficiency, and in laboratory tests, they already reach 27%.

HJT panels are also a relatively new technology. Hence, there are concerns about reliability. With the popularization and availability of this solution beginning, research groups and PV manufacturers around the world have a keen interest in this technology. As a precautionary step to avoid degradation mechanisms, the research wing from PV-Lab. It has been shown that encapsulants with higher volumetric resistivity such as POE and TPO showed no degradation even after 500 hours of PID test, while the use of EVA can lead to quite high PID resulting in a power loss of up to 30%. The use of edge sealants has also been found to be effective in preventing PID.

The price of HJT Panels

Although the HJT technology does not currently occupy a key position in terms of the number of photovoltaic panels produced, the price for the HJT panel is not „deadly”. Considering that the HJT configuration in most cases is:

a few percent more is not noticeable on the scale of the 30-year investment. At a slightly higher price, HJT also gives more power from the same dimensions, the best temperature coefficient and minimal degradation of less than 13% after 30 years.

From tests and the opinion of manufacturers, HJT panels show the highest level of use of double photovoltaic cells. Bifaciality above 90% is declared, for example, by AKCOME. This means that solar modules using HJT silicon will be a few% more efficient at producing electricity on the backside.

HJT Technology is well known for its high performance.

it also has the best two-sidedness of around 90% of all silicon architectures on the market.

The heterojunction is not only another high-performance technology of silicon cell construction but also characterized by the best two-sidedness. In fact, Panasonic’s (formerly Sanyo) HIT modules were the first commercial bifacial products available back in 2000. HJT technology typically exhibits the highest two-sidedness (bifaciality) of any advanced crystal cell technology, exceeding 90%. This is due to the symmetrical structure and excellent passivation of the structure, also on the backside. However, as with other n-type cells. HJT also requires that the silver-based metallization pattern on both sides be two-sided, which means more silver consumption and increased cost. Alternative ways to solve the problems are interesting metallization options such as electroplating or the use of innovative joining methods such as MBB which can significantly reduce the consumption of the paste. 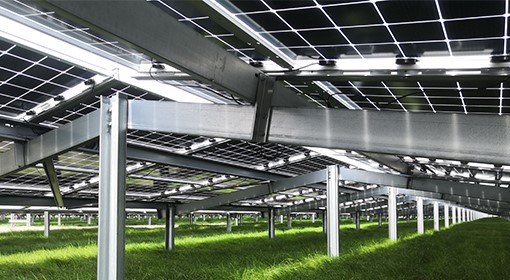 The heterojunction is not only another high-performance cell structure but also has the best two-sidedness. In fact, Panasonic’s (formerly Sanyo) HIT modules were the first commercial bifacial products available as early as 2000. HJT technology typically exhibits the highest two-sidedness of any advanced crystal cell technology, exceeding 90%. This is due to its symmetrical structure and excellent structure passivation attribute also on the rear side. However, as with other n-cell architectures, HJT also requires that the silver-based metallization pattern on both sides be two-sided, which means greater silver consumption and increased cost. Another disadvantage of HJT is that it uses low-temperature cure pastes which means their paste consumption is high to achieve good conductivity levels. But there are alternative ways: interesting metallization options such as electroplating or the use of innovative joining methods such as MBB can significantly reduce the consumption of paste. 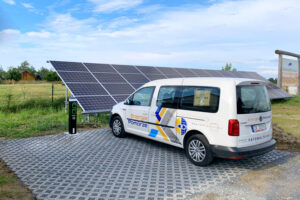 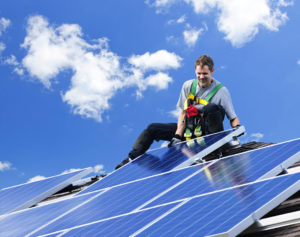 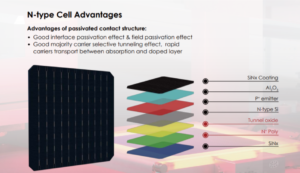 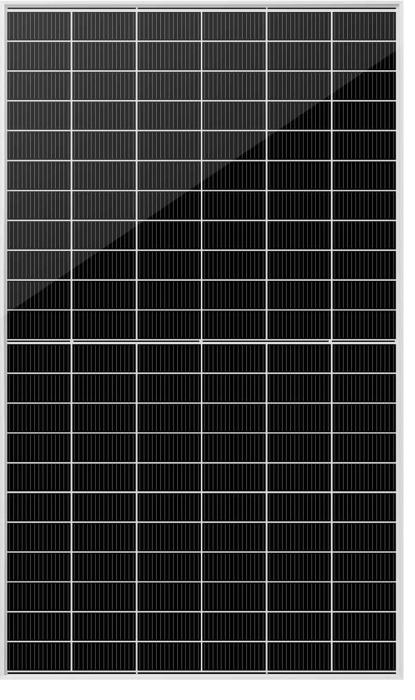